German Chancellor Angela Merkel will step down from power in Germany following the next federal election in September 2021. Once described by Forbes as the world’s most powerful woman, Mrs Merkel has led Germany since she was appointed Chancellor in 2005. As she reaches the end of her tenure, many Germans and Europeans are wondering what her legacy will be – and what Germany’s future will look like without her. 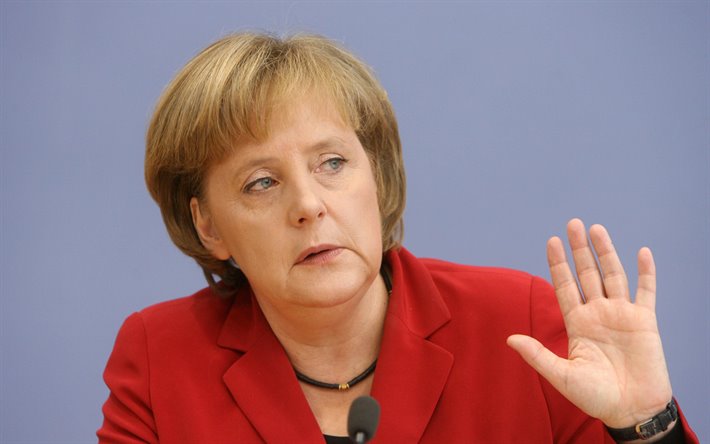 Mrs Merkel became the first-ever female Chancellor of Germany in 2005. Since then, she has served as the Christian Democratic Party (CDU) leader with four consecutive terms in office, making her the third-longest serving Chancellor in German history. She did not intend to run a fourth term. Only after a dinner with outgoing US President Barack Obama in 2016 did she decide to run again. Obama supposedly “pleaded with Merkel to run again so that somebody — she — could hold together the West and the world. Four days after that, Merkel announced her candidacy.”

For the most part, Mrs Merkel and her policies have been popular in Germany. She has steered it and the EU through many a political storm; between the Eurozone crisis, the immigration crisis, the rise of populism and the COVID-19 pandemic, she has repeatedly survived her fair share of political turbulence (mostly) unscathed.

“She has been measured, cautious, methodical, pragmatic, sometimes maddeningly noncommittal and seemingly always in control.”

Already, there are multiple emerging narratives around Merkelian leadership. For some, her legacy will be largely positive – for others, not so much. Let’s look at two of her policies that cause a divide in opinion:

Of the 1.8 million people who filed for asylum in the EU in 2014 and 2015, more than a third applied in Germany. In 2015, Mrs Merkel’s government registered more than 440,000 applications while German officials claimed that more than 1.1 million people had entered the country. That August, Mrs Merkel introduced an open-border policy that allowed refugees to apply for asylum in Germany regardless of which EU country they first landed in. As the resulting wave of refugees funnelled into the country, she faced widespread criticism and political backlash.

The new far-right political party, the Alternative für Deutschland (AfD), gained some significant momentum in votes after the crisis. The AfD was established in 2017 as a direct response to the open-border policy, and is known for being nationalist, populist and anti-Islamist. When Germany held federal elections in September 2017, there was a dramatic increase in support for the AfD; they won 12.6% of the vote, securing 94/709 parliamentary seats. This also made them the third-largest party to govern after the CDU/Christian Social Union (CSU) alliance and the Social Democrats (SPD). 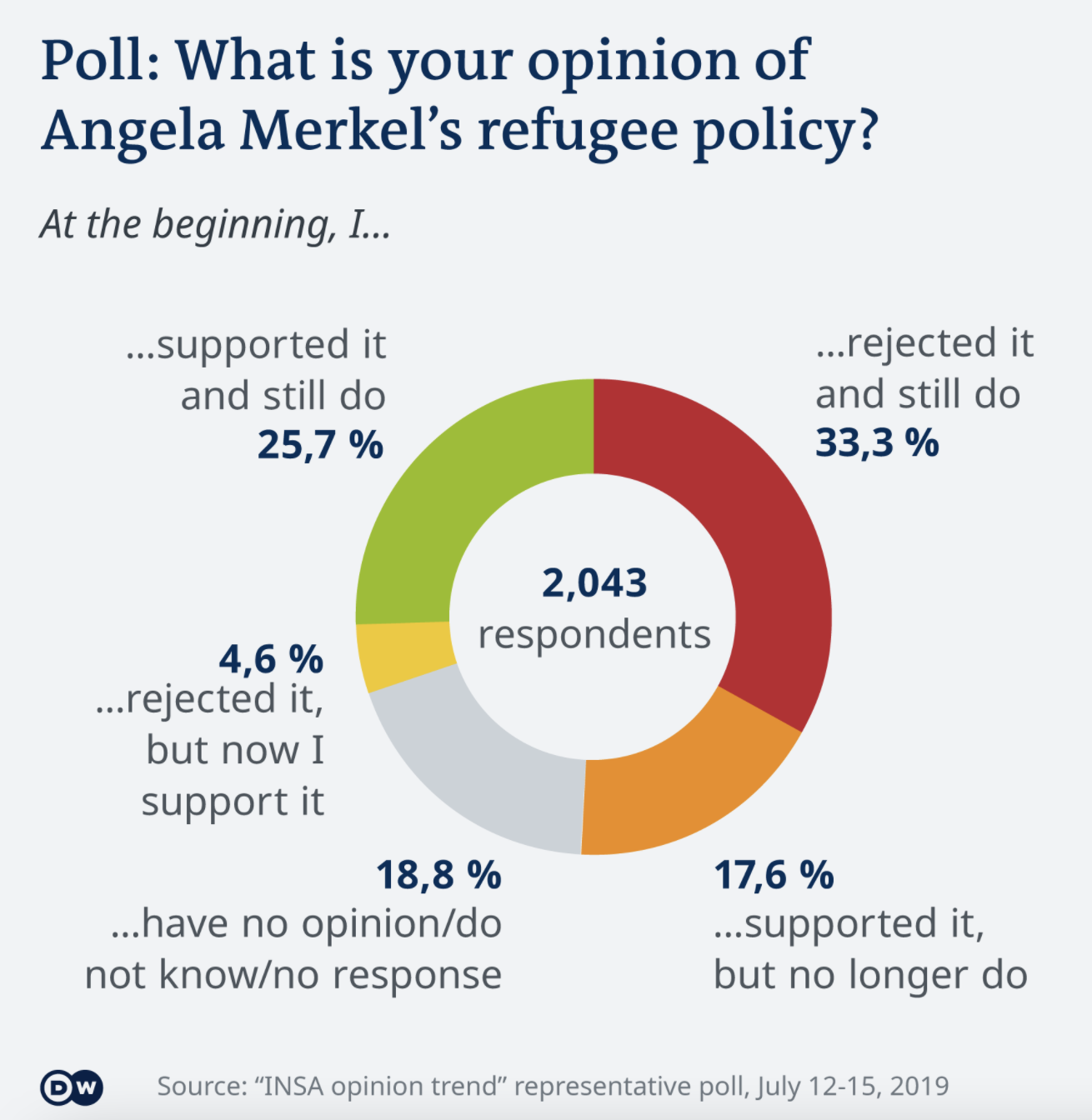 A 2019 survey showed that 17.6% of people who once supported Mrs Merkel’s refugee policy no longer did. While this does not necessarily mean that these people stopped voting for her, it shows a shift in support for her policy. Policies on topics like immigration are sensitive for voters so the percentage of people reversing their opinion is significant.

More recently, the AfD’s rise in popularity has flattened. According to July 2021 polls for the upcoming federal elections, the AfD should expect to gain just 11% of the vote. The CDU/CSU comes in at 29%, with the Greens following at 19% and the SPD at 16%.

The Nord Stream 2 Pipeline, a natural gas supply line from the Russian reserves to the German coast that runs under the Baltic sea, has elevated tensions between Germany and its fellow EU member states and the US. 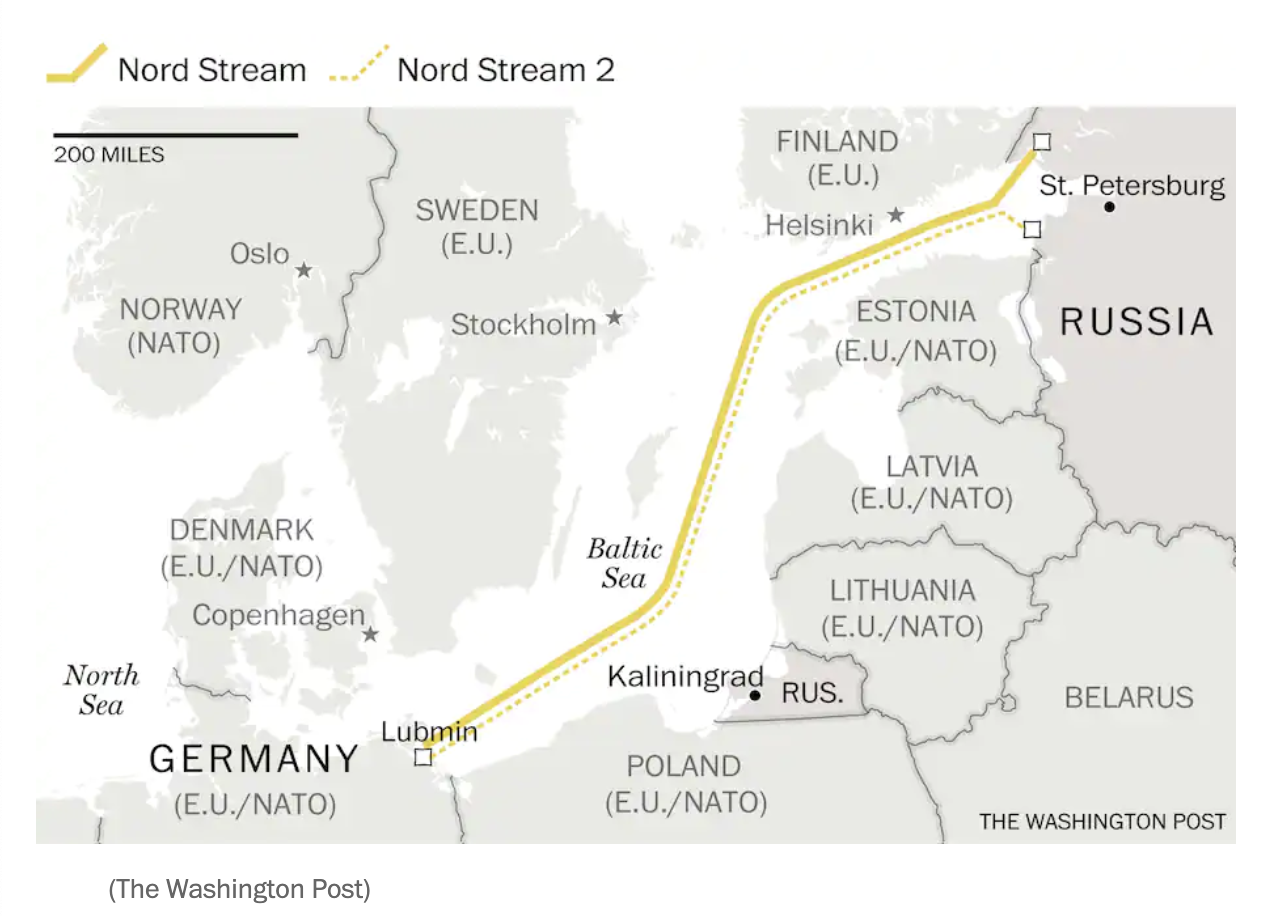 Germany depends heavily on gas and oil imports. The new line is owned by the Russian energy giant Gazprom and will run parallel to the original line, supplying gas to Germany at a relatively low cost. Germany and Russia see the pipeline as a great business deal, providing cheaper, cleaner energy to Germany while ensuring that the EU’s most prominent member continues to buy Russian.

However, the project has encountered stiff resistance beyond the two countries. The project’s most vociferous opponent, Ukraine, has traditionally served as a middle-ground nation for energy distribution. Currently, Russian companies feed most of Europe’s gas supplies through Ukrainian territory and pay transit fees in the process. Since the Nord Stream 2 bypasses Ukrainian territory, some believe that it is a Russian attempt to weaken and isolate Ukraine. Further abroad, US leaders and lawmakers fear that the Nord Stream 2 “would give Russia too much power over European gas supplies, handing Russian President Vladimir Putin a wider market and geopolitical powers at a politically precarious time.”

In Germany, the project receives criticism from the Green Party. The Greens are polling well before the upcoming federal election and show no sign of softening their stance on the pipeline. Party leader, Annalena Baerbock, believes that the project undermines EU sanctions against Russia.

In spite of this, Mrs Merkel and US President Joe Biden have since reached an agreement on the Nord Stream 2. The agreement will aim to invest €200 million into energy security within Ukraine and sustainable energy developments across Europe, with both parties “resolutely committed to the sovereignty and territorial integrity” of Ukraine.

What kind of Germany is Mrs Merkel leaving to her successor?

Her successor has large shoes to fill. Mrs Merkel has garnered praise from Western leaders throughout her 16 years in power, and while her policies may not be universally popular, it is impossible for any politician to be liked by everyone. All told, she has weathered a number of crises throughout her rule with calm and reason.

Of course, the Germany that she leaves behind is not the most stable one. COVID-19 has hurt Germany economically just like the rest of the world. The country has cases of far-right infiltration in the military that need to be addressed. Most crucially, the next Chancellor must find a way of leading Europe and promoting EU cooperation amid rising anti-EU sentiment across member states.

Megan Bente
Megan is currently a master's student at the LSE, pursuing a MSc in History of International Relations. She is a dual citizen of Germany and the United States, but spent her most of her childhood and teenage years growing up in The Bahamas. She wants to pursue a career in journalism, focusing on writing about European international affairs, politics, and foreign policy.

Is It Time To Re-Evaluate How We Do Democracy?

In the current era of political distrust and ideological extremism, perhaps the only element of modern politics we can largely agree upon is its democratic structure. Or can we? Democracy is revered as the only political system giving value to the opinions and rights of all individuals. But in a society plagued by misinformation and […]

With the prophetic words of “opening a new chapter for Europe”, the EPP builds its manifesto around four catchphrases. Whether political soundness and coherence follow those, is more debatable. Spitzenkandidat for the party Manfred Weber, has little chance of actually following Jean-Claude Juncker next year, as the national heads of government favour Michel Barnier or […]

The Austrian elections are over and Sebastian Kurz’ conservative ÖVP has come out on top. The night ended in bitter tears for the socialist SPÖ, which lost nearly 6% and booked its worst ever result in history at 21,2 %. The only upside? In 2017 the far-right FPÖ was close to beating the SPÖ into third […]