They say to keep doing something over and over again but expecting different results is a sign of madness. So how can we expect Europe to really progress if we keep inviting the same people to the table, making the same old empty statements about “progress” and “unity” but without really making any action to turn these ideas into a reality?

The world is changing in various ways – from the COVID-19 pandemic literally knocking the wind out of us, to a long-overdue global acknowledgment of the ongoing racism and remnants of colonial ideologies that permeate our societies.

Something has to give.

Last week, New Europeans and the Institute Prospective et Securité (IPSE) teamed up for an online conference on how all European citizens should be able to have their say if we have any hope for progression as a European community, and what “new voices” have to say about the Conference of Europe initiative?

I joined the debate on behalf of the European Future Forum (EFF), and as a part of the Europe Future Fringe initiative that we are working on at the EFF, along with several other pro-European organisations. 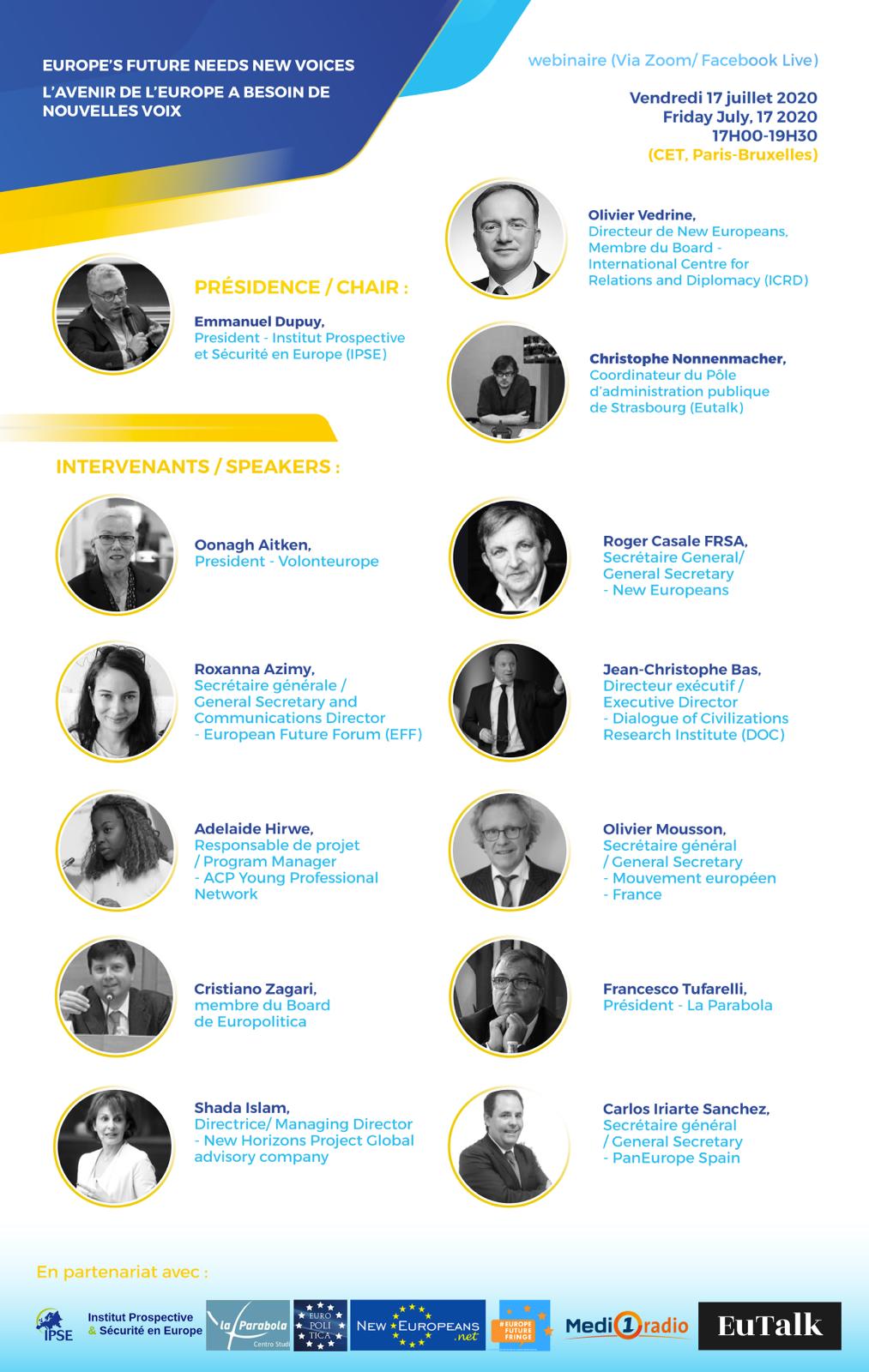 What was discussed at the conference?

The COVID-19 crisis has tested us in more ways than one. We have already witnessed incredible changes in how we live, work, and collaborate as societies. From staying indoors for weeks on end, putting all social, leisure, and travel engagements on hold for several months, working from home becoming the norm, and communities large and small becoming increasingly distant yet simultaneously more connected, in a curious way, banding together reminiscent of wartime days.

So how will Europe come out of this? Wounded and bewildered, or stronger than ever before?

The Future of Europe?

The Future of Humanity

As I have already discussed in more depth in a couple of previous articles, (most recently here and here), Europe may be a global leader in terms of ethnocultural equality today, but in order to truly eradicate all traces of racism from current society, we simply have to address past wrongs – starting with the colonial past that is essentially the foundation of the “progressive” Europe we know today.

This, of course, is pretty uncomfortable and often met with defense when brought up even today. But this isn‘t about pointing the finger, but rather about moving forward together as a united global community. Accepting past wrongs in order to put the future right.

We must focus on “new voices” in order to make real progress. Those of young people. Those of people from different social, ethnic, religious, cultural backgrounds. Those of people of all genders and sexualities. In various ways, the pandemic has shone a spotlight on the ongoing inequalities in our societies, and we must pay attention.

Indeed, the days of the “eurocrats” calling all the stops from their lofty Brussels offices must end if we are ever to hope of an inclusive and future-focused European society. One with more citizen engagement, more transparency for open dialogue, and a wider pool of perspectives influencing the decisions – benefiting both those individuals from the groups who usually go unheard, as well as society as a whole which will have the benefit of a more complete picture.

The Era of Eurafrica and Eurasia?

This talk of accepting Europe‘s colonial past spurred further conversation around the future of Europes relations with the African and Asian continents. Both African and Asia are tied to Europe in various ways – through shared (albeit admittedly turbulent) history, as well as culturally and linguistically as another side-effect of colonialism.

Now that former colonised countries such as India, Pakistan, Kenya, Nigeria, Ghana, and Rwanda are developing at an incredible rate, it makes sense both morally and economically for Europe to attempt to restore its complicated relationships to these countries. After centuries of Europe focusing on its transatlantic relations, perhaps it is time that we looked more to our continental neighbours, to support each other and finally repair the severred relations and largely still broken trust.

The Future of Work

And then there are the more immediate changes on our horizon. The world was already in a time of great change before the pandemic hit and acted as a catalyst. As our lifestyles become increasingly globalised and digitalised, and yet somehow more detached at the same time, what does the future look like for the average European citizen’s daily life?

To start, as we often do, with work: evidently, every sector has had to adapt to these unprecedented times. Those on “front line” jobs such as in the medical and food distribution sectors have had to rise to the new challenges presented by the pandemic. Those in industries hit hardest by the pandemic – such as aviation, leisure and hospitality – are still facing very uncertain times as they are only very slowly starting to pick back up around 4 months after their businesses suddenly ground to a halt. And then there are the office-dwellers whose commutes have reduced drastically as they swapped meeting rooms for zoom, and had to get by with personal laptops, makeshift desks, and shaky home WiFi connections…

Chaos aside, the pandemic seems to have only highlighted how our increasingly virtual mode of communicating has the potential to completely transform the  future of how we work. The online conference in question, originally planned to take place in Paris, was only a reminder of this. Indeed, most of us have never attended so many video calls as we have in the last few months! And so, if working as a remote team is already in our grasp, shouldn’t more organisations and companies be embracing this type of workforce, not only reducing their own overhead costs and widening their recruitment pool, but also contributing to the development of more rural areas – as it would no longer be necessary to move to the big cities to find high-level employment?

To conclude, this debate allowed experts and activists from various fields and from all corners of Europe to come together – in an aptly virtual setting – to discuss how the strange times we are living in has the potential to transform out future, in both direct and indirect ways. This changing world not only presents us with new challenges, as the combination of our modernised globalised lifestyles and our comparitively primitive and unsustainable obsession with animal agriculture is bound to lead to more pandemics. But on a lighter note, it also presents us with new opportunities.

We are already living through a digital revolution, and we are seeing the world change as a result – from our own lives right to the global scale – and now it is more apparent than ever that we must seize the power of technology as a force for good. It can enable us to have less of an impact on the environment and empower citizens from all areas by enabling us to work, learn and even vote remotely online. Social media provides the perfect platform for open dialogue between citizens and those in positions of power, closing the gap between them and democracy,  political transparency, and citizen engagement. And, it can even offer us alternatives to the extensive animal farming that got us into this mess, as plant based proteins and lab-grown meats are now surging in popularity.

And then there‘s the desperate need for new voices in Europe, which has perhaps never been more clear. From the need for young people to step up to have their say in politics and the climate crisis, to the need for more ethnic diversity in decision-making roles to ensure a better understanding about the ongoing inequalities at the highest level. It is not enough to consider the needs of all, but the European Institutions and national governments must invite all to have a seat at the table.

So let‘s hope for a brighter future for Europe during these dark times.

The struggle against the coronavirus over the past few months has consistently been defined as a “war” in Europe. Beyond Donald Trump’s insistence on qualifying as a “Wartime President”, Emmanuel Macron declared France “at war”, so too did Boris Johnson when stating that the British Government will “act like in wartime”. Decidedly, some in Europe […]

What Spain Expects From the EU

Photo courtesy of the European Commission. As in previous crises, the Coronavirus pandemic has highlighted the lack of economic “punch” that we have in Spain. Here, our commitment to tourism means that if we do not reverse it soon, that we remain at the mercy of the so-called frugal countries… Just to confirm, we are […]