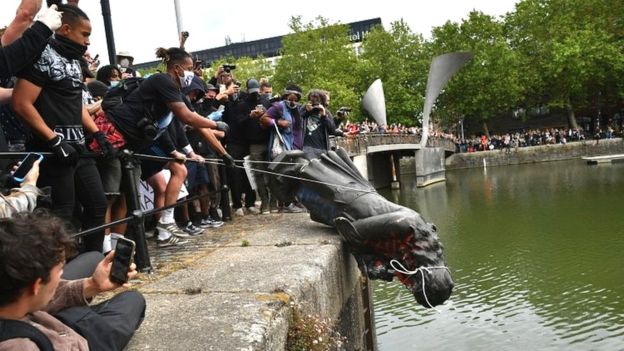 In case you haven’t heard, a statue of 17th-century slave trader Edward Colston was torn down this week during a Black Lives Matter protest in Bristol, South-West England.

According to the BBC, after the statue was toppled, a protester was pictured with his knee on the figure’s neck — reminiscent of the video showing George Floyd, the black American man who notoriously died at the hands of a white Minnesota police officer last month.

10,000 people then dragged the statue through the streets to the city’s harbour, where it was then thrown into the very water where this same historical figure reportedly threw deceased slaves once upon a time…

So who was Edward Colston?

Colston was a member of the Royal African Company, which was responsible for transporting around 80,000 men, women, and children from Africa to the Americas where they were forced to work as slaves and never enjoy freedom for the remainder of their lives.

However, due to the fact that while on his deathbed in 1721, he so graciously bequeathed his wealth (acquired from trading, exploiting, and harming human beings) to charities ,  his alleged “legacy” can still be seen on Bristol’s streets, memorials and buildings to this day.

So — does doing some (still rather questionable) good at the end of your life cancel out a lifetime of wrongs?

Camp A: A Criminal Act?

The mayor of Bristol himself, Marvin Rees, called the statue an “affront” – deeming it no loss to the city that it had finally reached its demise.

However, the national government doesn’t hold quite the same sentiment. Some are claiming —UK  Prime Minister Boris Johnson and Home Secretary Priti Patel to name a couple of biggies — that this was a “criminal act.” That the statue is a part of British history and that we cannot erase what happened, so should hold onto relics of the past as reminders, to teach and inform about both history overall, and where we went wrong.

The British Police are even said to have launched an investigation to identify those who “committed an act of criminal damage.”

Now, I am not one to condone violence – or the destruction of historical artifacts for that matter. However, there are some instances where human wellbeing has to be prioritised. And the continued presence of such a statue – especially in the current climate where ongoing systematic racism in the western world is being called out more than ever – we must question whether the presence of certain “artifacts” –  at least so publically and without putting them into context for educational purposes – is acceptable or in line with the values we now claim to uphold in modern European society.

This event certainly raises a question that should be addressed across Europe regarding how we present relics from a past we are not so proud of. How do we ensure we acknowledge and remember past horrors of colonialism, sexism, white supremacy, and violence – and yet do so in such a way that it does not in any way glorify the individuals responsible? How do we overcome the fact that we all have ancestors that had beliefs or did things we would now view as unforgivable? And yet, not live our lives in a constant state of self-loathing and self-flagellation, but neither dismiss bad deeds done in the past simply as “of a different time”?

There must be something in between where we can acknowledge, condemn, learn from – and yet not punish ourselves for these past wrongdoings. But I don’t think that keeping a celebratory statue of someone who profited from human enslavement and death is the answer…

Camp B: A Long-Overdue Statement?

But hang on a minute — is this statue was so educational and is now serving the noble purpose of teaching us something about the past, then… why have most of us never heard of this guy until now?

If anything, throwing his statue into its watery grave has made us discuss him and the terrible acts he committed like never before. So those so worried about education can probably not lose sleep over that.

If statues really taught people things, really were educative, given that we have so many to slave traders, colonialists, and murderous racists, wouldn’t you expect everyone to be an expert on atrocities of the British Empire

There are copious, and yet hard-to-stomach comparisons we could make: there are, after all, many well-known figures throughout history who committed abhorrent acts against humanity. And yet, we manage to learn about them, we know about who they are and what they did, and yet somehow manage not to keep old statues up in our city squares or name streets after them…

I can think of one especially relevant to Europeans: Adolf Hitler.

How do you think Jews, Roma people, disabled people, LGBTQ+ people, or frankly, anyone who isn’t a neo-nazi feel, if there were still statues of him with plaques celebrating his “good deeds” in the likes of Berlin, Warsaw, or Amsterdam?

Some are arguing that Edward Colston, despite his “shortcomings” did contribute some good to society. He eventually used his (slave) money to support and endow schools, hospitals, almshouses, and churches in Bristol, London, and elsewhere. As such, his name is commemorated by several Bristol landmarks, streets, and schools. And perhaps even more shockingly, charitable foundations inspired by ones he founded still survive.

Well, Adolf Hitler helped to pull 1930s Germany out of a severe depression and got the economy back on its feet. He led the construction of the country’s “autobahns” — motorways connecting the different regions which meant huge progress for the time.

Did I ever think I would be stating “good things” that Hitler did in an article? No. But it’s important to note that most people — even the most evil people who ever lived — did some “good things” in their lives. However, when the bad stuff is on the level of slavery or the Holocaust, then these better deeds are evidently overlooked. They don’t mean anything in the face of the bad stuff.

And that’s why, just as we shouldn’t celebrate a slave trader because he gave some of this money he earned (from the lives and unpaid labour of enslaved Africans) to schools and churches — just as we don’t celebrate Hiter’s economic or infrastructural wins in spite of his comparable crimes against humanity.

Why is it any different to celebrate someone whose success fed off a comparable disregard, exploitation, and extermination of an entire section of society, merely because of the way they were born?

And then there’s King Leopold II of Belgium – those of you who know Belgium will know that his name pops up all over the place both in the capital and elsewhere. This is in spite of the fact that he committed atrocities against the colonised Congolese people.

However, since starting this article, it has been reported that his name endured a similar ceremonious statue-defaming and toppling went down in Belgium’s most populous city of Antwerp. And this ripple effect is still ongoing, through Europe – seems like every hour a new statue is targetted – making us come to the horrific realisation just how many racists we still celebrate in public places…

Father stares at the hand and foot of his five-year-old, cut off as punishment for failing to make the daily rubber quota. Belgian Congo, 1904.

Brussels still has squares, statues and streets that honour of the architect of this horror #LeopoldII pic.twitter.com/rMFVwBFxIa

I can also add that here in the UK, various TV shows and films that came out only in the last decade or so are now being reviewed and sometimes taken down due to the racist jokes and stereotypes that in a few short years have gone from being widely accepted to deeply condemned.

And in a similar fashion to the feminist #MeToo movement of yesteryear, black people and other ethnic minorities are speaking out about injustice they have faced and long kept quiet about. Finally, many are feeling empowered enough during this time of gathering anti-racist momentum, to show the rest of us the racism that still goes on, often behind closed doors.

So what is going on? Has the tragedy in the US sparked real change across the globe, making us finally wake up to the racism all around us? Is Europe finally addressing its horrific past of inflicting harm and misery on the basis of racist, white supremacist ideologies?

The Black Lives Matter protests on both sides of the Atlantic are being condemned in various ways. From the violence breaking out in some places, to the statements such as these. But we have to ask ourselves — how can there be people getting angrier about the reaction than the cause?

How can people show more concern for a metal replica of a racist who died hundreds of years ago than for real people alive today, losing their dignity, their opportunities — and in the worst cases, their lives — all because of the colour of their skin and the centuries-old extremely damaging ideologies that the likes of this historical figure actually upheld?

And perhaps most importantly — what message do we give in societies that greatly profited from human exploitation such as the US, the UK, or the rest of Europe – if we continue to revere names that committed such horrific acts?

Is there anything at all that you can shamelessly say after the phrase “He enslaved and killed black people, but…”?

Similarly, the police responsible for the deaths of George Floyd, Breonna Taylor, and countless others, cannot be defended because, in other circumstances, they may have helped or protected people.

Perhaps, we need to think less of the historical or educational value of such relics of white supremacy, and think more about our opportunity to make history by providing a more thorough education of how much of western society came to be.

Europe has a shaky history when it comes to racism, exploitation, and harmful ideologies. It is our duty and responsibility as Europeans today, not to deny past wrongdoings. To learn from and acknowledge them. But also to make sure we don’t overstep the line – to not fall into the trap of celebrating, rather than merely acknowledging the existence, of certain individuals. This issue is growing in relevance as we become gradually more aware of just how much European society as a whole has benefitted from crimes against humanity of the past – and to some extent, still in the present.

Do you want to support the #BlackLivesMatter movement? Well, start by educating yourself and those around you. About how things used to be in your country. How they still are for people who don’t enjoy your privilege – privilege you likely don’t even realise you benefit from. Where did the wealth in your city come from? What values was your society founded on?

Of course, self-flagellation will do no one any good. But education,  awareness, and a genuine effort to constantly learn about problems outside of our own little bubble, and become better at supporting others and striving for progress –  are key.