Who knew that the topic of gender equality would still be so divisive in 2020? But bring up the subject online or in a group setting, and you are likely to be met with a whirlwind of contradicting opinions.

Some claim that gender equality has already been achieved in the majority of the world and those who claim otherwise are nothing but whingers, and others insist that gender discrimination is rife and that even Europe still has a long way to go.

So… which side is right?

Something has to be said of the insidious sexism which lingers on in many environments. I’m not only referring to the blatant kind, such as sexual harassment or directly discriminating against women. Rather, even unintended and subliminal biases from well-meaning individuals of any gender can undermine women and girls.

Oxfam actually claims that there isn’t a single country in the world has achieved gender equality. That can’t be right, you may persist – not even in Sweden, or Norway? Alas, no. Although some countries such as these have made impressive progress in combating lingering sexism, there still isn’t one single country where you can definitively confirm that both sexes co-exist in absolute equality.

Let’s dive straight into the most controversial issue – which also just so happens to be a key obstacle to gender equality. Although in Europe we are, overall, trying to diminish the long-held belief that men and women are fundamentally different – that they should assume different roles, and intrinsically have different strengths and weaknesses,  one thing that we cannot separate ourselves from is our differing biological makeups which define (of course, with exceptions) the two sexes in the first place.

Indeed, we are all humans and our sex chromosomes should not dictate our capacity for any job, function or otherwise. That being said, the fact that it is women who bear children has always held them back in some ways. From professional performance and thus salary and promotion prospects suffering from the time off work (not necessarily a societal inequality – but important to remark nonetheless), to discrimination of employers towards pregnant women – or even just women of “childbearing age” – so as not to have to deal with the costs and inconveniences of maternity leave.

And women who do not get pregnant still face numerous disadvantages. For example, the limitations imposed on reproductive health services combined with the fact that women are still expected to bear the burden of family planning, mean that even avoiding pregnancy can be a drain on their finances, time and health. Long-term contraceptive methods for men are in the pipeline, but often met with mistrust, as who in their right mind would use contraception with hormonal side-effects, right..?

In countless contexts, modern society continues to use a man as the default human – from medical research, to crash test dummies, to the smartphone in your hand. For instance, clinical trials still rely on data from studies done on men as if they apply to women. Specifically, Caucasian men aged 25-30, who weigh around 70kg. This is “Reference Man,” and he apparently represents the whole of humanity. But of course, he does not. The Guardian writes:

Men and women have different immune systems and hormones, which can play a role in how chemicals are absorbed. Women tend to be smaller than men and have thinner skin, both of which can lower the level of toxins they can be safely exposed to.

So not only does this idea of a young Causacian male being used as the default human across the board directly or indirectly lead to the harm of those who do not fit this mold. But, it also perpetuates the archaic narrative of “Mankind” and his female accessory.

Imposter syndrome is defined as a collection of feelings of inadequacy that persist despite evident success. These alleged ‘imposters’ suffer from chronic self-doubt which overrides any proof of their competence. And of course, anyone – from any gender or background – can experience this.

However, according to Imposter Syndrome expert, Clare Josa, women are more prone to this phenomenon. This is backed by recent research from British bank NatWest, as part of its #OwnYourImposter campaign, which showed that 60% of women who have considered starting a business didn’t do so because of a lack of confidence – despite their skills.

So do women still lag behind because they simply don’t believe in themselves as much as their male peers?

Some point at lower levels of testosterone as the culprit of this confidence deficit. Although the science on this is interesting, the key component here  – as often is the case – seems to be social conditioning. Women are subconsciously convinced as early as childhood that they cannot and will not be as competent as their male counterparts. Sure, they can get that degree or that job, but there will always be a man close by who will allegedly and inexplicably know better. Both the man and the woman in question have been conditioned to believe that this is so, and so the act continues, and each party plays along.

Actual misogyny in your workplace? Surely not! But misogyny is defined as the general ‘dislike of, contempt for, or ingrained prejudice against women’ – which of course can take many forms, of varying subtlety.

Maybe there are traces of it bubbling under the light teasing of the woman who got angry in that last meeting – who maybe even raised her voice to express her disagreement (how dare she). “Well, she made a fool of herself” you may say; “she was hysterical!” someone laughs. Or even “maybe it’s her time of the month…”

I have personally had the wonderful experience of being referred to by a co-worker as “a good girl, but…” to supposedly sweeten the belittlement which followed my audacious expression of an opinion which contradicted his own.

And yet, replace the shouty colleague with a man and what do you get? “He’s having a bad day,” maybe even a “that was out of order.” But are there any comments on his mental or reproductive state? Any infantilising put-downs? I doubt it.

This is something which affects not only women, but any individual who doesn’t fall into the category of straight, stereotypically “masculine” male. In short, although society preaches that it’s what’s on the inside that counts, we still live in a world obsessed with outer appearances – where the tall, domineering male in a suit and tie tends to be the one whose professional competence is naturally more respected.

I must reiterate that in order to tackle this gender bias, we must come to terms with the fact that in general, men and women are physically different. Men on average are taller and physically stronger, which gives them an irrational headstart to the petite woman beside him – even if she towers over him in professional competence. Because who can tell? She takes up less space, and doesn’t command the same attention in the meeting room. And so, even if only subliminally, we tend to respect his authority more.

Of course, this doesn’t apply to all men or all women – and many men of a smaller build, or who simply don’t identify with this breed of masculinity will suffer from a similar bias. But it is a common unconscious gender bias in the workplace that we cannot overlook.

This is the one that we have all heard of – and which is luckily being increasingly called out. That being said, the issue of men viewing women as sexual objects to be enjoyed and admired goes beyond the obvious inappropriate touching or comments which are now at least more widely condemned (though they of course still take place to an alarming degree).

Even seemingly trivial details such as the expectation for women to wear high heels, make-up, or even form-fitting clothing for certain roles have to leave us scratching our heads in this day and age. It’s one thing to require a smart and presentable appearance – but why does the achievement of this for a woman often go so far beyond what is expected from a man’s business attire?

And we need to have a long hard look at the loaded but often well-meaning comments suggesting a woman’s presence in a meeting will “sweeten the mood,” or that a female coworker will help to “charm” a client. Make no mistake: bar certain very specific professions, your female coworkers are not there to charm or to sweeten the experience of the males. I imagine they are there to use their qualifications and experience to produce great work – just like anyone else. 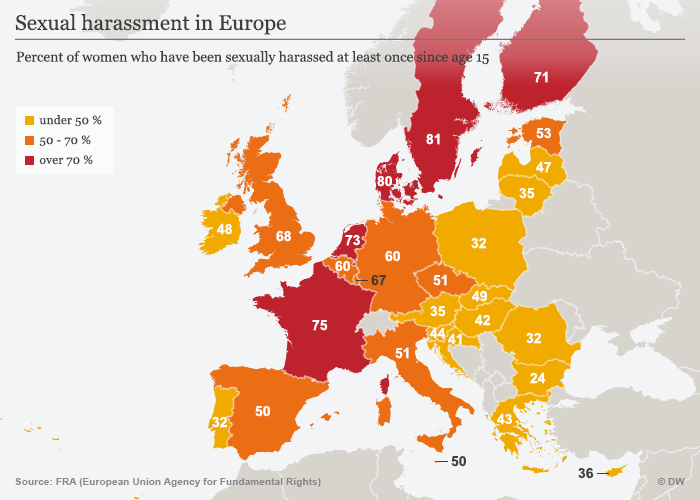 Of course, the less subtle forms of objectification and inappropriate sexualisation of women unfortunately still live on. Although the #MeToo movement shed some much-needed light on this toxic remnant of male entitlement, the issue simply won’t budge – and Europe is no exception.

With over half of women aged 15 and above having experienced some form of sexual harassment at some point in their lives – shockingly France, the Netherlands, Denmark, Norway, and Finland scoring over 70% – it’s clear to see that Europe as a whole still has a major sexual harassment problem.

We may have equality or near-equality on paper, but how can we claim to have achieved true gender equality when men harassing women is still so commonplace?

Across Europe, yes – even in the Nordic countries, unpaid domestic and family responsibilities still fall overwhelmingly to women. This, in turn, means that more women than men work part-time, creating ‘not just a gender pay gap but a gender pension gap as well.’ On top of that, sexual objectification, professional underestimation, and misogynistic ideologies and stereotypes still permeate the European female experience.

The European Institute for Gender Equality (EIGE) states: ‘the European Union has been moving towards gender equality at a snail’s pace. With a Gender Equality Index score of 67.4 out of 100, the EU still has a lot of room for improvement.’ The World Economic Forum contends that there is an excruciatingly long wait for gender equality, estimating it to take 99.5 years to achieve full parity between men and women at the current rate of change.

We cannot take gender equality for granted just because from within our privileged bubble all now seems to be fine, because we now have some women in powerful positions, or because ‘women have it much worse in other countries.’ Europe as a region may be doing relatively well on a global scale, but the statistics don’t lie. And when it comes to the rights, freedom, and respect of human beings “relatively well” simply isn’t enough to call off the fight.

What do the Burqa and GDPR have in common? Our Right to Avoid Observation

Why there still is no common European asylum system

Asylum seeker’s rights are human rights Migration, asylum and international protection are the EU’s most pressing matters in today’s polarised political climate. With more than…

It comes as no great shock that climate change deniers are often the same crowds who oppose migration. But what happens when the climate changes…