Why is Brussels so white? 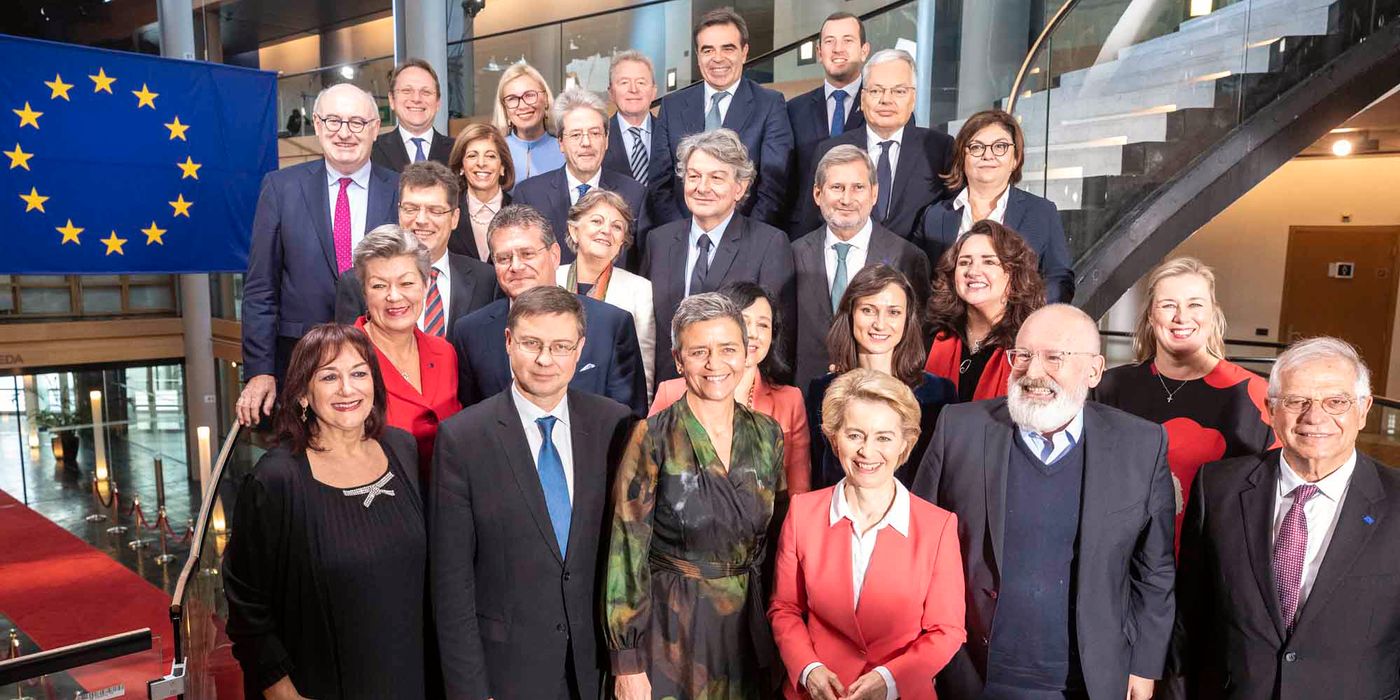 Okay, so Brussels itself is extremely diverse. But head to the EU quarter and any large building there sporting blue starry flags, and it’s a different story.

We hear a lot about the flaws of the EU institutions these days – with Brexit (yet again) fast approaching, and the world arguably having more of an eye on the EU in the past 4 years than ever before. But here’s something we don’t often talk about with regards to the Brussels bubble: its lack of ethnocultural diversity. That is until the emergence of the #BrusselsSoWhite hashtag, finally shining the spotlight on the question: Why are the EU institutions so… well white?

Sure, the EU represents Europe, which means that you would expect European citizens to dominate those blue starry hallways. But it is an embarrassingly outdated mindset that being European equates to being white. Being European in today’s melting pot society is far removed from ethnic lineage, so we should expect this multiculturalism to be reflected in all areas of our society. 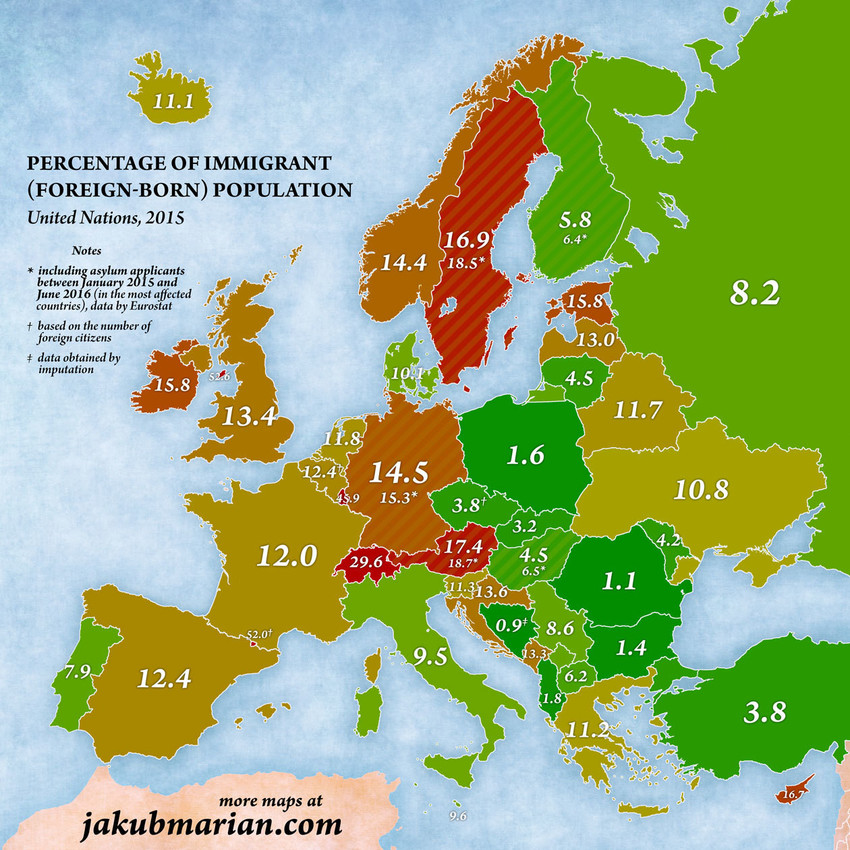 It’s no secret that most EU member states have sizeable ethnic minorities among their citizens, as the map above reveals. Most Western-European states have an immigrant rate of over 12%.

And these figures often don’t even take into account 2nd and 3rd generation immigrants, or those from mixed backgrounds – so the actual percentage of Europeans with some degree of recent overseas lineage is even higher.

The historical ties linking the most prominent source countries of immigrants in member states such as the three mentioned above make these groups’ stake in EU affairs even more relevant. That’s right: the colonial past of countries such as France, Germany, Belgium, and the UK means that many citizens today have a lineage from these ex-colonies.

This means that many of these citizens resided in their EU home countries for several generations. And to add insult to injury, their ancestors’ initial move was either due to active encouragement or obligation from their respective European national government to replace the manpower lost after the war.

This has intertwined various non-European and European nations over the decades: Turkey to Germany, the Maghreb nations to France, the Congo to Belgium, and a plethora of Carribean, West African and South Asian states to the UK – to name only a few examples.

A lack of representation

When it comes to the lack of diversity in EU affairs, there are, as always, many contributing factors to consider. First of all, there is the potential accusation that the EU institutions’ HR departments simply discriminate against applicants from ethnic minority backgrounds. And secondly, there is the possibility that not so many individuals from minority backgrounds are applying for such positions in the first place.

As much as we all love a good finger-pointing, the issue at hand seems to be a result of the latter scenario. Rather, the ethnic homogeneity of the EU institutions is most likely the result of subtle yet persistent socio-cultural tendencies for certain minorities to feel unwelcome or disconnected from certain professional spheres.

A security guard @europarl asked my Iranian friend & colleague "what are you doing here?" before he asked to see both of our badges.

It's not a simple security check. People simply don't get why black & brown faces are in these places.#BrusselsSoWhite

We can see from the often healthy proportion of ethnic minorities taking up professions as doctors, lawyers, and accountants that this is not a simple case of the US buzzword “white privilege” for high-skilled professions (though this undoubtedly still plays a part), but is more specific to jobs related to EU affairs.

Nowadays, all EU citizens are at risk of feeling detached from the EU, but what is it about ethnic minority groups that makes them particularly disengaged from the Brussels buzz?

Whatever your ethnicity, you may well agree that this ethnic homogeneity within Brussels should change, but you would be forgiven for assuming that this is not your fight. But this absence of diversity at the hub of EU decision-making harms all of us, as it propagates the mindset that only that small slice of the population has been summoned to fill this role.

Admittedly, the EU promotes equality for all and shuns discrimination of any kind – and this is something to be celebrated. That being said, advocates of EU values and inclusivity must practise what they preach in terms of making an effort to normalise cultural diversity, and to stop pigeonholing people according to our prejudices – as harmless as they may sometimes seem.

For instance, the stereotypical image of what a Dutch or a Swedish person must look like. It’s now 2020, and we should not still be asking someone where they’re “really from,” if their initial answer combined with their appearance or name doesn’t fly with your prejudices.

Rather than blaming any individual or even the EU institutions themselves, this ongoing lack of ethnic diversity must be addressed as a more complex sociocultural phenomenon. While ethnic-minority Europeans often feel that they don’t belong in certain spaces, outdated attitudes towards ethnicity and national identity are propagated and maintained.

Your face when you've just had someone ask if you're lost & then you're told to leave, on your first day at work. ??‍♂️

I know I'm visibily different. I don't have the privilege to hide my identity. I'm BLACK & my name is Magid. I don't intend to try fit in. Get used to it!
??? pic.twitter.com/HhWG63kE9U

Given Europe’s ugly history with racism and the current anti-immigration rhetoric infiltrating global politics, the institutions’ continued lack of diversity is an understandably sensitive topic.

There is also the risk of Europe taking an approach to “race” similar to that of the US, attaching labels to its population. Categorising EU citizens in this way will only intensify social divisions, but the French method of ignoring the very existence of ethnic diversity may not be the best option either.

In short, we must find a balance between making ethnicity into something more important than it really is, and disregarding its existence altogether, as both ends of the spectrum are insidiously harmful.

One thought on “Why is Brussels so white?”