When most of us in Europe think of African migrants – though it may hurt to admit it – images of crowded little boats braving the Mediterranean or knock-off handbag sellers lining tourist-filled boulevards may spring to mind. But is this the full picture when it comes to Africa to Europe migration?

With thanks both to the dominant narrative of the media, and our failure in Europe to identify first-generation African migrants unless they are in certain stereotypical situations, Europe’s perception of what African migration looks like today is rather skewed.

These are human beings, not just a statistic, or a fear-mongering “other” to be used by certain far-right figures. And far from being exclusively poor and uneducated men looking for low-skilled jobs, as with any other migrant group, there is a huge variety of demographics and reasoning behind African migration.

Indeed, Africans today are moving abroad for numerous reasons. While some travel to escape war and conflict, many are simply seeking better livelihoods and opportunities, to put their hard-earned skills to good use, and to achieve personal ambitions. But whichever reason it is – can we just agree that the stigma has to go?

To learn more about the facts and realities regarding African migration, we joined a group of experts for a policy insight hosted by Brussels-based think tank, Friends of Europe. 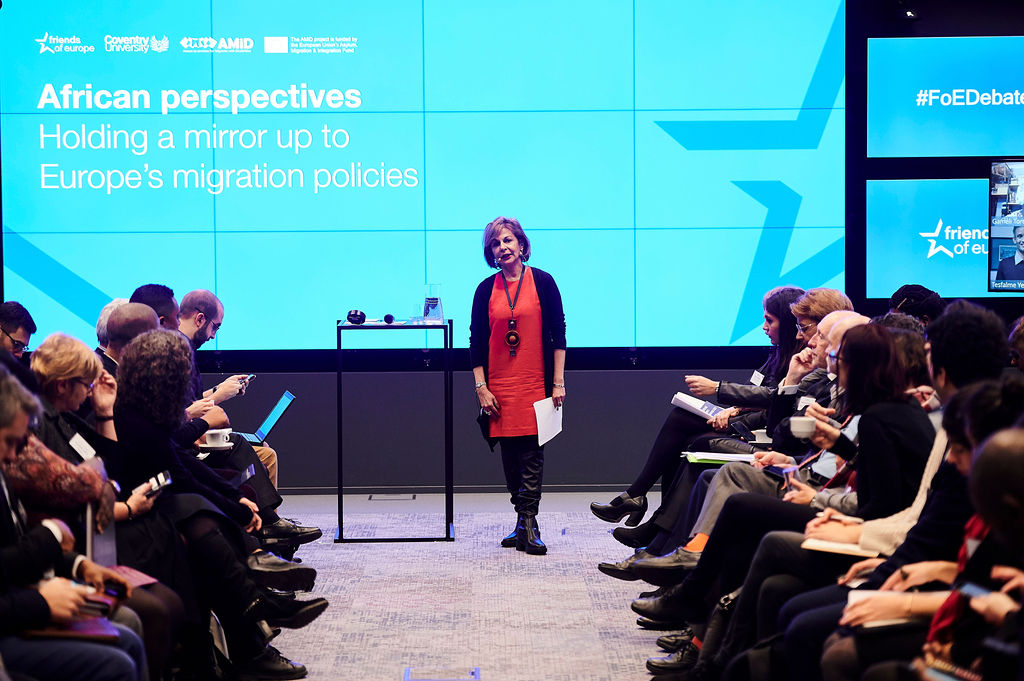 African perspectives: holding a mirror up to Europe’s migration policies

Friends of Europe’s Policy Insight, “African perspectives: holding a mirror up to Europe’s migration policies”, took place last month in Brussels, with the intention of delving deeper into the truth about African migration to Europe, challenging long-held misconceptions as well as exploring ways to facilitate migration for both the migrants and their host countries.

The speakers and participants – including representatives from NGOs, embassies and the European Institutions – examined the policy responses to migration from Africa. Specifically, they focused on the importance of efforts to create educational and employment opportunities for young Africans in their countries of origin, reducing inequalities that create barriers, and creating safe, legal pathways for those who wish to take advantage of the potential opportunities provided by international migration.

Heaven Crawley, Chair in International Migration at Coventry University, who carried out a major piece of research on the experiences of migrants crossing the Mediterranean to Europe in 2015, began the session by stating: ‘we need to get away from this idea that Africa is coming to Europe. The vast majority of migration in Africa actually stays within Africa.‘

On top of that, despite the disproportionate media representation, most Africans migrating to Europe don’t travel by boat, and do so legally on work permits. Those coming from Africa are a diverse mix of young, old, male, and female. They migrate as families and as individuals, for various reasons, and to myriad destinations. So why is our perception so wrong?

Why Africans leave their countries

It is true, however, that Africans are indeed on the move. While fear-mongering headlines warn of mass African migration to Europe, the reality on the ground tells a different story.

In 2017, there were 36.3 million Africans living outside of their home countries. This accounted for around 14% of the global migrant population at the time. But, Friends of Europe claim that ‘these numbers conceal a more complicated picture.’

A landmark report by the United Nations Development Programme (UNDP), Scaling Fences: Voices of Irregular African Migrants to Europe, sheds some much-needed light on the key reasons why migrants move from Africa to Europe.

The report interviewed 1970 migrants from 39 African countries in 13 European nations, all of whom self-declared that they arrived in Europe through irregular means and not for asylum or protection-related reasons.

It explores the array of assumptions about migration from Africa to Europe, and challenges the narrative that all migrants from Africa are poor with low education levels. In reality, 58% of those surveyed were either employed or in school at the time of their departure, with the majority of those working earning competitive wages.

Where are Africans going?

In actual fact, the vast majority of African migrants move within Africa. Less than a quarter of them travel to Europe – and most of those who, do so legally. Furthermore,  after a temporary period of working overseas, many migrants move on to another destination. It is not usually a simple route from A to B.

Why do so many Africans leave their countries?

Many African migrants move in response to war and conflict but, others simply for economic and educational reasons – seeking better livelihoods and the opportunity to lift themselves and their families out of poverty and economic hardship.

Many Europeans – even those who support migration – consider the welfare privileges of EU Member States to be the major pull factor. Particularly in countries where migration is becoming increasingly stigmatised, we tend to focus on the healthcare and, in some cases, benefits and housing which migrants can receive.

The truth is that many migrants have no viable alternative to moving, and it is not a question of whether they receive these services free of charge, but more so one of having any future or stability at all. We don’t talk about conflict or human rights violations in Africa as much as the Middle East, despite the fact that 6 out of the 10 main refugee countries are in Africa.

For African migrants, we often assume their move to be uniquely economically driven. Although there are many economic migrants from all parts of the world, we unfairly generalise African migrants in particular, without considering any other potential reasoning.

Kenyan-born Natasha Kimani, Head of Partnerships and Programmes at Well Told Story, proposed that reality could be anything from their lives being under threat from conflict or persecution (which we now almost uniquely associate with migrants from the Middle East,) to personal reasons such as international relationships or overseas work or study (which we seem to think are luxuries reserved only for Europeans.)

Kimani continued that Europeans moving to Africa tend to be left out of narrative completely. The truth is, she exaplianed, that migration between Africa and Europe does not flow in only one direction. Although European migrants are often adorned the less-threatening label of “expat,” this does not change the fact that Europeans can be migrants too.

As we at Euro Babble have explored previously, Kimani added that no matter how qualified they are, Africans are always “migrants” and never “expats.” Although merely words, the connotations of these terms has a dramatic impact on the way in which the individuals are perceived – and welcomed – by the host country. It is falsely assumed that expats move by choice and not a necessity, or that expats are professionals and migrants are low-skilled.

Let’s be real – it is also assumed that expats are white and migrants are anything but.

Development, Migration, and where the EU gets it wrong

Heaven Crawley posed the question of whether we are really witnessing evidence-based policymaking, or if it is more often a case of policy-based evidence-making. She commented on how, although there is no shortage of data on migration, the EU is failing to implement these findings into their policies. Instead, it is the policies themselves which are often what shape the presentation of data.

Crawley continued that the EU trust fund for Africa may sound great in theory, but in reality, it often only funds totalitarian regimes and fails to reach the citizens who it is aimed for. As a result, although such funding is meant to reduce the need for migration, it only increases it.

In general, Crawley concluded that policymakers should be more aware of the fact that development doesn’t prevent migration, as is often suggested. This is because it means that more members of a population are empowered to become global citizens – to study or work abroad out of choice, rather than necessity. But let’s not overlook the moral implications of reduced migration being a key motivation for overseas development…

Lul Seyoum, Director of the International Centre for Eritrean Refugees and Asylum Seekers, emphasised the need to unleash the potential of migrants and refugees – as much for the benefit of the host countries as for the individuals.

Indeed, just as most developed nations are in need of manpower, migrants and refugees are in need of a secure place to live and work. With its aging population, it might be imagined that Europe would welcome motivated future citizens, employees, and neighbours with open arms. Newcomers contribute to the local economy, revitalise areas with declining populations, restore labour gaps and contribute to the economy.

But in spite of the obvious benefits, Seyoum warned, African migrants in particular continue to be shrouded by damaging xenophobic narratives which – once reserved for far-right parties – have become worryingly mainstream. 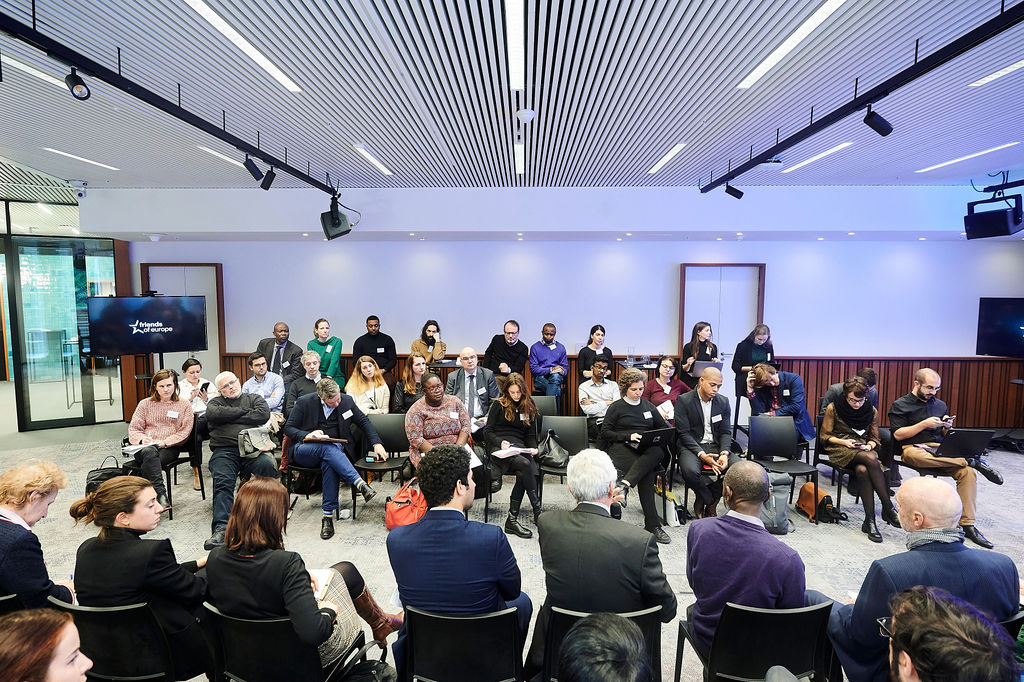 Meanwhile, European policies continue to centre around strengthening borders and stopping migration. The next speakers examined the policy responses to migration from Africa – focusing particularly on the importance of educational and employment opportunities for young Africans in their countries of origin. This would not only reduce inequalities, but also create safe and legal pathways for those who wish to take advantage of the opportunities offered through international migration.

Although we should destigmatize migration, African governments should still, of course, do all that they can to ensure that their citizens can live comfortably and prosperously in their home country, should they prefer to.

Mbakeh Camara, Head of University Relations and Innovation at the University of The Gambia and Founder of Be Inspired Internationally – a charity focusing on the economic empowerment of young people from a disadvantaged background in the Gambia emphasised that those Africans who do seek opportunities outside their country of origin were as entitled to do so as anyone else.

Issiaka Konaté, Director-General of Ivorians Abroad in the Ministry of African Integration and Ivorians Abroad, added that moving countries is a human need and thus should be a human right, commenting: ‘No one can live in a country where everyone looks like them, we need to let go of this fabricated concept. We all belong.’ He noted that public opinion in Africa is also influenced by western media, which, due to the current Afrophobic narrative, can lead to Africans feeling insulted daily.

Friends of Europe’s Director of Europe & Geopolitics, Shada Islam, proposed: ‘We need to change our perceptions. Think of Africa as an opportunity – a potential – and not a beneficiary of our largesse.’

Overall, despite widespread acceptance of human rights and equality in theory, toxic narratives in Europe around migration unfortunately live on. Working from the bottom up to engage individuals, civil society and governments alike and criticising the media outlets who perpetuate generalisations about African migrants is where potential lies to debunk these harmful stereotypes once and for all.

European Elections: can Vestager define a new approach for a changing Europe?

Another edition for the beady eyed followers of European politics and the current Spitzenkandidaten race for the EU Commission president. This time, we look at…

A Brexiter’s case for Europe

The Brexit campaign made numerous promises for what leaving the EU would mean. Looking at the arguments of the Leave campaign, it may now be…

The lands that Europe forgot? Rural Europe’s Struggle with Modernity and Identity

When describing our diverse EU family, we love to gush about the likes of Paris, Budapest or Prague – but what about those further-afield places,…

One Reply to “African Migration to Europe: Facts vs. Fiction”