The far-right undercurrent in Europe is nothing new, but experts are now warning that these former marginal pockets of extremism are gaining support from a much wider and more diverse section of society. This new wave of ultra-conservatism combined with the anticipated exodus of the UK’s stabilising presence in the European Parliament suggests a major ideological shift is underway.

Rather than isolated groups which are the exception to the norm, it turns out that networks such as Agenda Europe facilitate secret meetings and conferences to unite far-right activists and their supporters from around Europe and beyond, taking place in unassuming public places in Europe’s major cities – From London to Zagreb – often with many high-profile and influential attendees spanning age, cultures and religions.

The report opens with the sinister warning that: ‘In Europe, fundamental human rights have been increasingly under attack in recent years. While the rise of ultra-conservatism has been apparent, precisely how these actors are organising, fundraising and attempting to exert influence has not been clear.’

But it is not exclusively homosexuality and abortion rights that such movements choose to target – even the use of contraception, IVF treatment and the right to divorce are being demonised.

In response to the report’s findings, the UK Secular Society commented: ‘The group is aiming to ban same-sex marriage, divorce, gay adoption, the pharmaceutical sale of contraceptives, antenatal diagnostics and IVF. It aims to introduce “anti-sodomy legislation” and bans on “gay propaganda” alongside international bans on abortion, stem cell use and euthanasia. And it is seeking the abolition of equality legislation.’

You may assume that members of such groups would be loud and proud about their beliefs. Though this is indeed often the case, they are much more reserved when it comes to where they get their funding, and how different organisations and actors are linked internationally.

Leaked documents and footage exposed in the report reveal that invitees are forbidden to share details with the outside world, labeling even the meeting agenda “strictly confidential.”

A documentary by ARTE and CAPA made waves across Europe by interviewing high-profile representatives of these groups and grilling them with sensitive questions – from why they feel the need to hide, to where they get their money from.

This documentary was actually banned from being shown in Spain due to an ongoing lawsuit by the Spanish organisation CitizenGo, since the film includes footage of founder Ignacio Arsuaga, requesting financial support from known far-right Russian oligarch Konstatin Malofeyev, who is even on the list of banned persons from entering the EU because of his alleged support for the Ukrainian rebels.

Almost 12 months later and the concerns raised in the report only seem to be intensifying. An ideological backlash to the social freedoms European society has struggled to achieve in the past half-century are in danger of being overturned – from access to reproductive healthcare, to migrant or sexual minority rights, there is an undeniable rising opposition even within Europe’s most progressive societies, such as France, Belgium and the Netherlands.

European Parliament President Antonio Tajani initially agreed to be a speaker at the ultra-conservative annual conference which took place in Verona over the weekend, the “World Congress of Families,” which is notoriously anti-LGBTI and women’s rights. This bold move made fears that the EU is contradicting its alleged values of tolerance, equality and celebration of diversity bubble to the surface, and was publicly denounced by both EPF and the European Parliament Intergroup for LGBTI Rights. 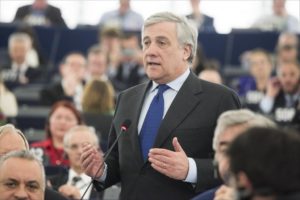 EPF Secretary and author of the report, Neil Datta, laments: “In recent years we have seen an increasing organisation of the movement against sexuality and reproductive rights. This community is well-connected and organized.” And it is this last part that is really worrying – rather than being the disorganised mess of hatred we often dismiss these groups to be, it seems that increasingly, they are uniting to form a much stronger and wide-reaching movement.

Last month, MEPs Terry Reintke and Malin Bjork chaired an event at the European Parliament discussing the current threat to human rights in Europe, and how this could have a real impact on the European Election results.

The discussion explained how extremist groups are no-longer separated by religion or national borders, but how different kinds of conservative activists from Catholic, Evangelist, and various Populist backgrounds are uniting over their common goal to supposedly “restore the natural order” of our societies. 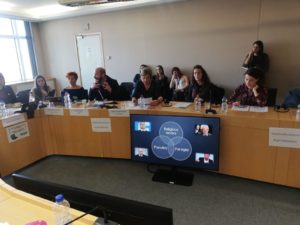 Speakers’ concerns about the new-found unity and infrastructure of anti-choice, anti-LGBTI and anti-feminist thinkers from across borders, political and religious groups echoed the EPF report and raised questions as to how we can combat the resurgence of this new hybrid of extremism.

The term ‘radicalisation’ was even thrown around, equating the spread of far-right ideologies to that of Islamic extremism. Admittedly, there is something uncanny about both crowds’ affinity for demonising entire groups of society and spreading hateful progaganda about the alleged lack of morality of their beliefs and lifestyles…

Yet another thing to thank Brexit for?

The MEPs on the panel warned that the the UK’s imminent exit from the EU, combined with the current ideological climate, could provoke a significant shift to the right in the European Parliament due to the lack of such extreme views even among the country’s most conservative MEPs. As such, the neutralising effect which the British contribution to the parliament has previously had, could potentially open the door for a surge of ultra-conservative representatives come the elections in May from countries such as Hungary, Poland and Italy who have known influencers in this movement.

Anti-women, anti-immigrant and anti-LGBTI rights groups like these target the values of personal liberty and autonomy which we  celebrate as the cornerstones of the European community. The fact that they feel the need to operate below the radar speaks volumes. But it is their increasingly widespread marches across European cities, their growing presence online, and their growing popularity among young people which is most alarming.

Despite the ample progress in social development and personal freedoms in the last few decades, the persistent survival of these movements suggests that we cannot stop fighting for equal human rights for all.

Whether you personally lean right or left, certain freedoms have previously united European political thinkers from across the spectrum, but now we are witnessing a widening of the gap between conservative and liberal, where basic human rights we once considered firmly established are once again under threat.

Just because European governments have come a long way does not mean that we can take our current rights for granted.

Or email Secretariat@epfweb.org to request a hard copy in English or French.

Whatever your political views – don’t let them go unheard in the European Elections! #ThisTimeImVoting

POLITICO tests the claim that EU membership costs citizens less than a cup of coffee a day. Original article written by Ryan Heath and Hanne Cokelaere 1/16/18, 4:00 AM CET Updated 1/21/18, 7:17 AM CET https://www.politico.eu/article/the-eu-membership-value-post-brexit-budget-coffee-index/

In Albania, Lady Justice doesn’t have a blindfold on her eyes, she wears Armani sunglasses. The balance in her hand is to measure how much money you can pay and the sword, on the other hand, is there to remind you that she can cut your head off if you refuse to. The judicial reform […]

Last November the long-anticipated sequel to Electronic Arts’ 2015 Star Wars: Battlefront hit the shelves. The game was predicted to do better in sales than its predecessor and get more favourable reviews, as Swedish developer DICE had gone out of its way to listen to its fans and set out to fix pretty much every […]