We live in a time of major shifts and upheavals. Technology changes everything around us from (geo-)politics, the environment, markets and the media, to how we structure our very daily lives. But what drives all of these changes and are we getting closer to the end of this wild ride or is this just the beginning? The digital disruptors are as elusive as an invisible hand that guides them to promote an end which was no part of their intention.

Some economists have long foretold that the underlying mechanisms of Capitalism would create larger and larger inequalities until the whole system collapses. In recent years, more and more news reports and political agendas around economic inequality have pushed their way to the centre of public attention. However, the headlines and short political phrases can be very misleading. Depending on which statistics one consults, one could arrive at the completely opposite conclusion. For example, Bruegel shows that global inequality and particularly income inequality has long been receding in this figure from April 2018:

Yet, as the Economist points out, the very rich have steadily been earning more and more and are seldom included in the statistics. So, who is right?

Conversely, both claims that inequality is increasing and decreasing are true at the same time; from a certain point of view. It is true that the rich have been getting richer over the past 30 years. It is only natural that they would. Assortative mating theory states that people are more likely to choose a similar person to them as their spouse (not necessarily for short-term relationships). This can mean similar height or bone structure, but also socio-economic background. This theory is underpinned by study results in the USA, published in PLOS One. As the rich and well-educated elites are more likely to pair with one another, the money stays in the same circles and potentially in ever smaller circles too, as rich families fuse together. Under-regulation (and lack of taxation) of the financial markets and the continued existence of tax havens are also potential factors to consider as the wealth does not get redistributed, but only grows from investment profits. Therefore, it is no wonder that their income continues to rise, as they continue to invest and earn more and more from their invested capital, without much hindrance from their respective governments. 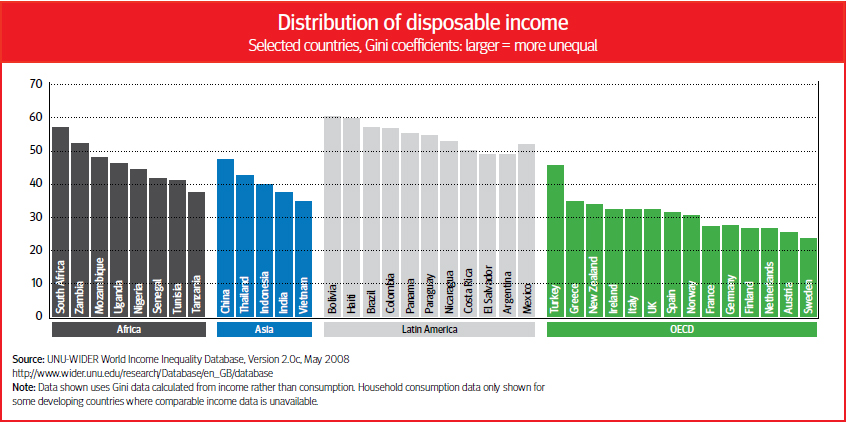 Europe remains one of the highest taxed areas with most sophisticated tax regimes and also retains low income inequality (relative to the rest of the world), as the World Inequality Report states. As such, whether or not inequality is rising or falling, also depends on which area of the world one looks at (and which time period). There is no blanket statement that describes how the world is developing, because it is too complex to fit into just one economic theory or ideology. As an example: on an aggregate level, inequality is falling, but in the United States of America, disposable income inequality has risen enormously over the past few years, as another figure from Bruegel (November 2016) shows: 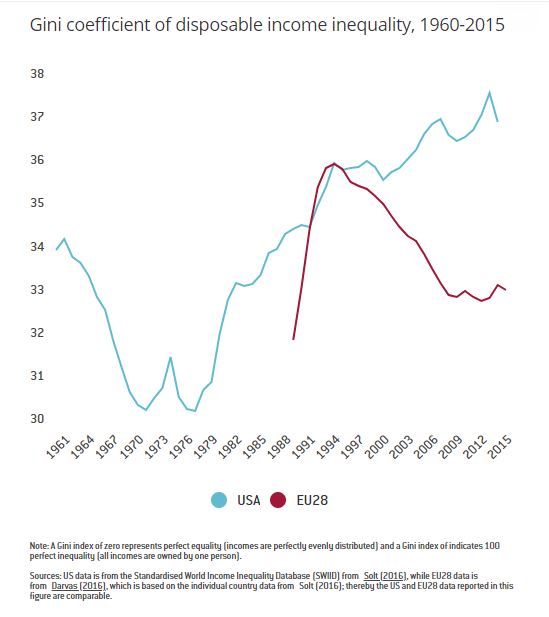 These different developments also showcase that different policy packages can have a significant influence on economic development and inequality in a given country.
But conditional on the type of inequality we look at, different conclusions can also be drawn, depending on our point of view (and point of observation). For example, the World Inequality Report showcases that wealth inequality is rising across the world, but Bruegel also showcased that in the European Union, average income convergence caused income inequality to shrink enormously before the Financial and Economic Crisis in 2008, meaning citizens in poorer regions, such as the young post-soviet states, increased their income relative to those living in richer regions before the markets were hit.

At the same time, we can also observe that global poverty has been slashed in half over the past 20 years, possibly due to better access to medicine, food and technology and generally better working conditions, caused by competition across open markets.

So if the data points us in so many different directions, based on which aspects we choose to look at, why do we hear so many people talking both in the media and in the political arena about perceiving a rise in global inequality over the last few years?

It is not necessarily because they all misread the statistics, or are trying to mislead the public (though that possibility cannot be excluded either), but because some people’s livelihoods are actually being threatened; and not by wealth inequality either. Income inequality could potentially rise again across the globe, because of poor political judgement when dealing with humanity’s next great challenge. This growing fear of inequality is the result of innovation disrupting the markets and evolving them into something new. The once shocking Industrial Revolution is now followed up by the Digital Revolution and rapidly changes the composition of the labour force.

Nowhere can the effects of rapid market shifts be felt more than in the former industrial hubs of the world, where globalised financial markets have devastated local industrial sectors before, such as in Detroit in the USA, Nord-Pas-de-Calais in France, North England, the Ruhr Gebiet in Germany, Bergslagen in Sweden and Southern Ontario in Canada. These areas lost their wealth in a matter of decades, but the changes we are about to face will potentially transform our society completely over the course of a century.

Europe’s Many Voices: The Iberian Peninsula

The Iberian Peninsula encapsulates the culturally rich Spain and Portugal, where apart from the obvious Spanish and Portuguese, an array of regional languages also scatter the land. I asked young people from some of the peninsula’s various regional language communities to share their experiences and thoughts about their unique linguistic heritage. Spain is an especially […]

Turkey not European enough? What is “European” anyway?

While the world celebrates the dawn of 2018, Turkey reaches the tentative milestone of 19 whole years as an EU candidate country. That’s almost two entire decades of waiting. The country has been an associate member of the Western EU from 1992 to its end in 2011. It also signed a Customs Union agreement with […]

Expats, migrants, immigrants… why we should choose our words carefully

The debate about how to define thousands of people moving to a different country is still ongoing in Europe. Expats, migrants, refugees… Many words are used to define people moving from their own country to another. But what is the difference between these terms? What makes an expat an expat and a migrant a migrant? […]