Back in June 2016, the Leave Campaign won the Brexit referendum with 51.9%, while the Remain Campaign finished on 48.1%. But two years later, as Brexit decision-makers drop like flies and many Leave voters are starting to agree that leaving would be a mistake, the future of UK-EU relations remains pending and an unmistakable sense of regret – or rather #regrexit – hangs in the damp British air.

Boris Johnson’s decision to abandon his post as UK Foreign Secretary came shortly after the departure of former Brexit Secretary David Davis, former Brexit Minister Steve Baker and a handful of junior government figures to top it off. Johnson claimed that the government had allowed a ‘fog of uncertainty’ to descend since May’s Lancaster House speech in January 2017.

That being said, the sombre-faced Conservative MP told the House of Commons in his resignation speech last week that: ‘It is not too late to save Brexit. We have time in these negotiations. We have changed tack once and we can change again. The problem is not that we failed to make the case for a free trade agreement of the kind spelt out at Lancaster House – we haven’t even tried,’ but are attempts to “save Brexit” futile? Is the UK better off abandoning it altogether?

This recent exodus of government officials certainly begs the question as to what turmoil lies ahead for the UK as it hurtles towards D-day in March 2019. But for many, this pessimistic feeling towards the UK’s departure is nothing new. All the way back in October, Britain’s former permanent representative in Brussels Sir Ivan Rogers elegantly declared that Prime Minister May’s decision to invoke Article 50 allowed Britain to be “screwed” in Brexit negotiations. For the original remainers, of course, the current impending sense of Brexit doom dates back even further than that, as even before the votes were cast they warned that Brexit would only mean trouble.

However, there is a rising movement of Leave voters who are now admitting that Brexit was a mistake, adorning the hashtag #RemainerNow and the slogan:“it’s ok to change your mind” in order to unify in their U-turn and attempt to heal the damage that has been done. The official Twitter account of this movement has now reached almost 9000 followers and in early July, the admins also launched a website to further spread this message. 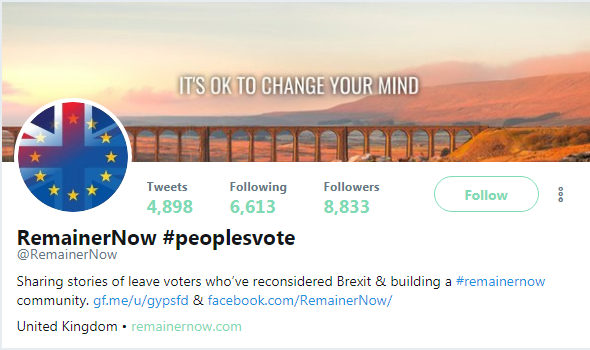 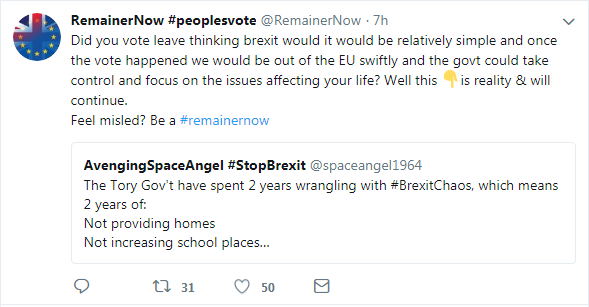 The Twitter account encourages those who voted Leave 2 years ago, but have since acknowledged that the never-ending mess of Brexit negotiations on top of the numerous benefits which would be withdrawn from British citizens, (from the nation’s beloved weekends in Benidorm, to perks such as free mobile data and the Erasmus programme) and now feel “misled, ” to come out and admit that their change of heart and attempt to halt Brexit before it’s too late.

Hugh Norris is one of the many Leave Voters who have helped to  set the #RemainerNow movement in motion, with his tweet that:

‘I voted Leave in 2016. I’ve since realised the Leave claims were based on lies & misinformation & are undeliverable.

In a democracy it’s ok to change your mind.

I have & am a #RemainerNow campaigning for a #PeoplesVote on the final deal. Join me.’

The mantra that ‘it’s ok to change your mind’ is almost revolutionary considering the usual reaction from Leave voters towards persistent remainers, until recently, was to snap meaningless remarks along the lines of ‘the people have spoken,’ ‘ this is what  democracy means,’ etc. This stubborn, stick-to-your-guns attitude is fuelled only by pride, and an aversion to considering another perspective, even when your own has proven to be pretty flawed. Self-image, of course, is a pretty non-substantial reason to plough on with what is proving to have been a pretty terrible and misguided decision for the nation. And the unsavoury revelations regarding the Leave campaign which followed begs the question of whether the referendum could be called a democratic vote at all.

Various claims such as the notorious “let’s fund our NHS instead”  were proven to be nothing but manipulation tools, as the NHS has received no such attention and the £10 billion “divorce bill” which the UK is now said to owe the EU has complicated what they portrayed as a straightforward financial advantage. Not to mention the perks which the UK received from its investment into the EU – public buildings, roads, healthcare cover when abroad, medical research, and regulated imports – among other advantages which benefit all.

Furthermore, it was uncovered that the Leave campaign may have also broken spending rules by claiming to donating money to an independent pro-Brexit youth group,when according to a Leave activist from the group, the money sinisterly went straight to a Canadian analytics firm. The national laws control the amount of money that can campaigns can spend during elections, and set the limit at  £7 million.

And to add insult to injury, Michael Gove also admitted this month that the Leave campaign was wrong to have fuelled fears about Turkish immigration in order to get votes. Manipulatively, it exploited the public’s fear of terrorism and unrest on their streets, arguing that being free of EU immigration laws and the implications of potential Turkish membership would somehow solve this very real security problem.

And if the outright lies of Leave the campaign were not convincing enough, you would think that the Cambridge Analytica scandal, where misuse of data and “cheating” by the company were revealed to have potentially influenced the referendum result, would have been. This meant that insidious use of personal data had been used as a tool to manipulate voters. Fortunately enough, 2 years later and the message is finally starting to hit home that the UK is yet to draw a line under this .

As it turns out, lying and manipulation for political incentive is somewhat frowned upon, and so the false claims and manipulative campaign techniques are now rightfully being addressed. This month, a petition began to ‘Rescind Art.50 if Vote Leave has broken Electoral Laws regarding 2016 referendum,’ which received 167,000 signatures after just one week. As per national regulations, it was discussed in Parliament, which ended up rejecting it (like most petitions).

The current outlook for Brexit negotiations looks pretty bleak, given that so many key decision-makers are abandoning ship, and even some of the most initially diehard of brexiters are getting cold feet.

The next step for Brits (and all the other EU citizens who are still willing to listen to this madness) is to wait for the outcome of this petition and the potential escape route it would give the UK.

Admittedly, there have been previous arguments favouring a re-vote, from claiming that the majority was not enough to justify such colossal changes, to complaints that unlike the Scottish referendum which also concerned irreversible changes for future generations, the minimum voting age was 18 rather than 16. Indeed, it is the young people who will be forced to live with the shambles caused primarily by the poor choices of older generations, so it seems unfair to exclude the portion of society that will have to live with this chaos for the longest.

Here’s hoping that an increasing number of Brexiters will open their eyes to the deception of the Leave campaign, and swallow their pride for the sake of their country’s future. As it stands, the UK’s turbulent ride towards March 2019 will most likely not get any smoother.

Humanity is plagued by existential threats. Threats, it seems we cannot overcome. Whether it is an asteroid that could hit the Earth at any time, wiping out all life, supergerms for which there are no cure, space lightning that can incinerate a whole galaxy in an instant, or the ever advancing changes to our climate, […]