Last November the long-anticipated sequel to Electronic Arts’ 2015 Star Wars: Battlefront hit the shelves. The game was predicted to do better in sales than its predecessor and get more favourable reviews, as Swedish developer DICE had gone out of its way to listen to its fans and set out to fix pretty much every issue players had with its predecessor (with the exception of the horrendous lightsaber combat, which still amounts to nothing more than people hitting each other with glowing sticks).

But the launch of the video game turned into a complete disaster following fan outrage over the game’s new progression system, which was tied to real currency microtransactions. This sort of monetisation has become the norm for many free-to-play titles and mobile games, but was unheard of for a fully priced 60€ game. It also didn’t help that the system seemingly allowed players to simply buy themselves a competitive advantage over others (this is called ‘Pay2Win’).

The gaming subculture is governed by its own norms, practices, ethical standards and even has its own social structures and discourses (e.g. the platform one uses to play games determines one’s race and these ‘races’ clash a lot on the internet). Pay to Win is considered one of the most horrendous crimes a game developer can commit. Much like in athletic sports competitions, gamers want the outcomes of competitive games to be determined by their skill alone and not by doping. Paying for advantages comes close to cheating and a system that enables cheating is frowned upon. This becomes increasingly so, as many competitive games turn into eSports (electronic sports), with tournaments and world championships being held for real money prizes of increasingly high amounts, up to six figure sums. 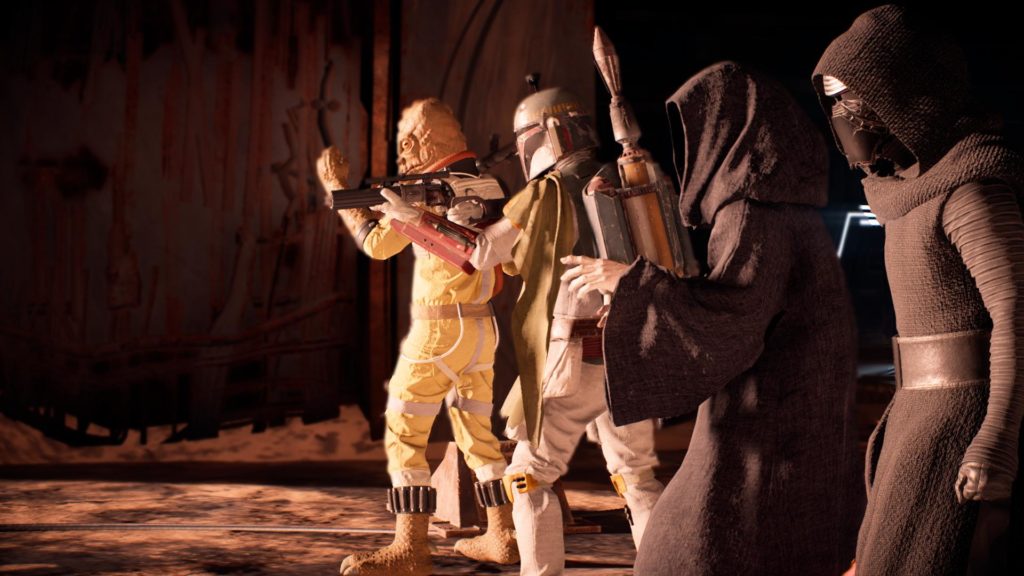 After Battlefront II got increasing backlash from YouTube gamers, EA and DICE issued several statements and tried to reach out to its fans. This resulted in the most downvoted Reddit post in history, sparking multiple reports in mainstream media outlets like the BBC. The Belgian and Dutch gambling authorities also launched investigations into whether or not the game contained illegal gambling mechanics. Shortly after, EA’s stock values dropped by over 2% (at the time of writing already down 10%) and Disney stepped in to salvage the botched operation. As a result, EA first lowered the amount of credits required to unlock their playable hero characters like Luke Skywalker and Darth Vader. A few days later, they further backtracked and the microtransactions were temporarily removed, leaving behind a progression system tied to loot crates that now can only be bought using in-game currencies.

But the story didn’t end there. In the US several politicians voiced their disapproval of the business practice and the state of Hawaii openly called for the ban of loot crates and is pursuing legislation to that effect. Meanwhile in Europe, the Belgian gambling authority has concluded that this type of monetisation is addictive and should be banned or at least regulated to safeguard children. To that effect, they are now consulting with other EU member states to potentially launch new EU legislation in that area.

It is good to see consumers triumphing over a big conglomerate and governments rushing to (potential) action, but is all this outcry really justified? Battlefront II received abysmal reviews, totalling only 67 on Metacritic, with a user rating of 0.8 out of 10 for the PC version. An average of critic ratings from various mainstream gaming outlets across the US, UK, Italy, France and Germany also gives it 68%, with user reviews from those same outlets only awarding it 17%, creating a critic-user review average of only 42%. Gamers were far more critical than the mainstream reviewers allowed themselves to be. Reviewers took apart every single aspect of the game, criticising everything except for its visual design (although gamers also criticised the lack of customisability in the game). 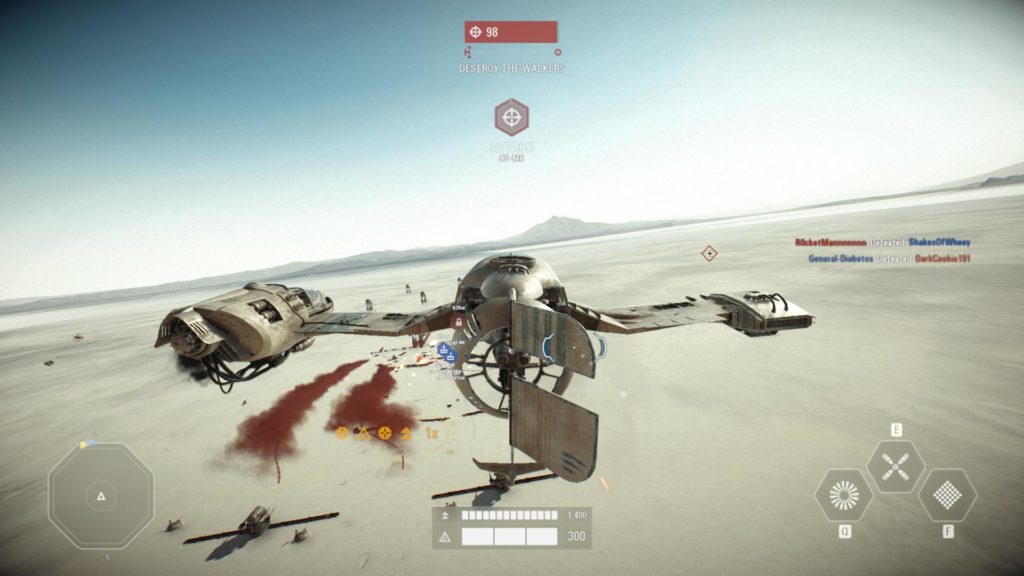 We took the time to fully immerse ourselves in the game and discover whether progression in multiplayer actually was a pay-to-win.

Calculations done by reddit users and YouTubers, which claimed one would have to play hundreds if not thousands of hours to unlock a single hero character are simply wrong. Having played around 10 hours (most of that time spent in single player), I managed to unlock all but three heroes. The achievement system put in place by DICE is very complex and rewards players very early on for trying out all aspects of the game, before slowing to a halt and making them grind for bigger and better rewards (which will give them a greater advantage in the game at a later stage).

At the same time, this system shows how ridiculous the star cards and microtransactions are. YouTuber ‘Angry Joe’ spent 40$ on loot crates to test the system and received no significant advantages through it. Instead, would he have bought the Deluxe Edition of the game (which costs around 20€ more), he would have immediately unlocked some of the greater weapons and star cards available in the game. So, while investing in loot crates appears to be the equivalent of throwing coins into a wishing well, the Deluxe Edition actually grants buyers an unfair advantage over other players. 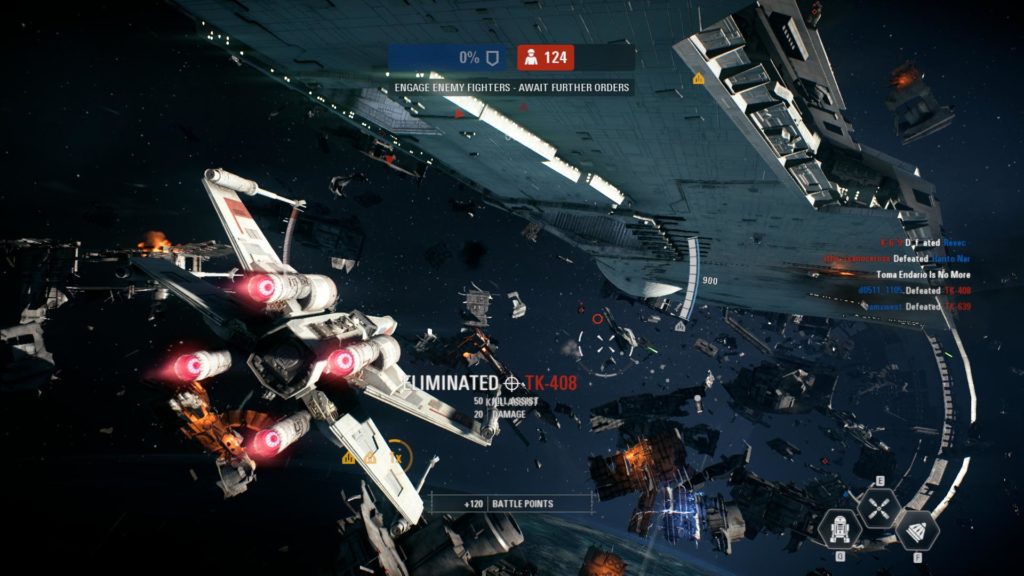 The progression system also unbalances the game significantly over time. While in the beginning, most players did not have any star cards, now one can clearly distinguish new players (who have none) from players that have sunk lots of money and hours into the game, who are generally around star card level 15 to 20. The latter cohort is not only more familiar with the game and its mechanics, but also has gained a significant advantage over new players, making it far easier for them to dominate matches. The idea of rewarding players for playing for a long time (or spending lots of money) is not inherently bad, but Battlefront II actually makes it harder for new players to join the game over time, which may actually lead to lower revenue generated through game sales if word should spread that the game is unplayable for newcomers after the core community has advanced beyond a certain level of star cards.

It should be stated however, that player skill still matters quite significantly in Battlefront II and no amount of fancy star cards can make a bad player win against the most seasoned players, even if they do not use any star cards. But herein lies the problem, as veteran players also happen to get the star card advantage in addition to their experience, ensuring that they will always dominate new or casual players.

The intense backlash to this model of monetisation has sent ripples through the gaming industry worldwide, with many developers speaking out against this practice. Whether or not Electronic Arts will learn its lesson from this, remains to be seen. Their removal of microtransactions from  Battlefront II and their other controversial title Need for Speed, as well as rumours of their efforts to retool the system of their upcoming MMORPG Anthem, hints that the reasons for the consumer outrage were understood. However, only time will tell, as microtransactions are said to return to Star Wars: Battlefront II in one form or another before too long and it is unlikely they will go away. But while legislation is sure to take many more years if it will pass at all, it is up to the consumers to keep the pressure up and ensure that publishers implement microtransactions correctly and do not abuse their players.

DICE has now announced that the progression system has been reworked completely and is now fully skill based. Microtransactions will be reintroduced into the game, but only for optional cosmetic items, such as character appearances. It appears that the developer has listened to its players and made the necessary adjustments. Electronic Arts’ stock prices have also fully recovered.

For most of the EU, nothing has changed due to Brexit. We go on with our busy lives and the pandemic currently occupies most of our attention. Why bother with Brexit anyway, when the economy suffers either way and in much worse ways than Brexit ever could? In a way, Brexiteers were spared a lot […]

‘The European Union is too far removed from its citizens,’ is a sentence uttered all too often. Europhiles have passionately defended the democratic nature of the union and its institutions. In 2014 the Spitzenkandidaten-procedure was introduced to increase the influence of the European Parliament and start a European public debate around the elections. The process […]

From Brussels to Helsinki: How Trump Destabilised the EU

Two weeks ago many contradictions of the EU policy making process were displayed yet again in the context of the migration crisis in the Mediterranean. There are deep divisions between the member states and the EU is essentially held hostage by intergovernmentalism and national vetoes. If this is one of the many internal threats, this […]